Monsters hide in the primordial chaos of the human soul. In that tumultuous ocean they sail through us observing every moment of our lives, hypnotized by the images that come from the outside world. All the emotions, all the sensations that we experience they observe through our eyes and try to whisper in our ears ideas that lead us to experience their favorite scenes over and over again. Being able to feel what a human heart feels is its highest desire. But their nature is simply too different from human, they are primal creatures that move by a pure instinct and alien to any type of reason. They only seek to quench that thirst that consumes them constantly but their minds intoxicated by these experiences cease to be able to see clearly and makes them want distorted versions of what they once sought.

In 1756 a Spanish priest known as “Fernando the flagellant” moved after witnessing the execution of a child and his father accused of heresy decided to embark on a pilgrimage with the boy’s remains to ensure that the soul of that child was totally atoned for of all kinds of sin. Pilgrimage that 3 years later would lead him to the same destination.
After the execution of the heretics, Fernando took the charred remains of the boy and with them made a capirote (a conical hat used by the Nazarenes during Easter) and embarked on a silent procession to Santiago de Compostela. 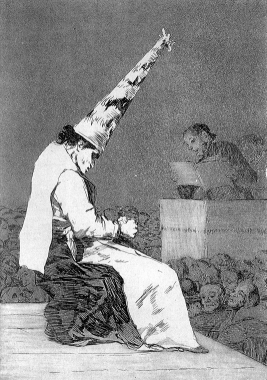 “Capricho 23” Fernando in his trial by Goya

After the Spanish inquisition was completely abolished in the Cortes of Cádiz in 1813, several documents came to light, including the transcripts of the confessions made by Fernando the flagellant before being condemned to the stake. The following paragraph is an excerpt from that text:
“You ask me what are those cards that I have brought with me since I returned from my pilgrimage hoping that you will receive the answer that you have already decided on me. Let me ask you: What will you do with those cards if I give you the answer that so long?What would you do if I told you that those cards were made by the Devil?What will you do if I told you that the Devil is in this room waiting for your answer?Will you burn those cards next to my body at the stake?Will you have the courage to bear the wrath of Lucifer in your body? "
The cards to which Fernando refers are a deck of 20 cards (which would later be known as “The Devil’s deck”) that were confiscated with his journal after his incarceration by the inquisition.The cards are as follows:
I - The Fly Nest
II - The Warlock
III - The Magic
IV - The Trepanator
V - The Spell
VI - The Hood of Bones
VII - The Black Sultan
VIII - The Cannibal
IX – The Wolves
X - The mirror
XI - The Court
XII - Madness
XIII - The Truth
XIV - The Lie
XV - The Dead City
XVI - The Ancient Palaces
XVII - Beelzebub
XVIII - The Worshipers of Meat
XIX - The Sacrifice
XX - The forbidden
Fernando’s diary sheds a little light on these letters. After days of fasting and silence on his pilgrimage, Fernando began to ask the Lord for a proof that would give him strength to continue his journey. Something inside himself asked to be sure that the journey in search of the total redemption of that child’s soul was not in vain. The days passed and one day in which Fernando had a blank mind, only thinking about his steps a voice appeared. Fernando described it this way in his diary: «A voice appeared on the horizon. His words were foreign to any known language. Is this the sign that the Lord has sent me? Is this one of your angels coming to my rescue to strengthen my faith?
The diary continues to describe the appearance of that voice, with increasing frequency: “It is the fifth day in a row that the voice reappears. His language is still incomprehensible to me, but I have found that trying to repeat those words immediately upon awakening images begin to sprout in my mind. When this happens I wonder, is this the language angels use to speak to the Lord?”
Fernando began to repeat the words that the voices dictated to him and from the images that arose in his mind he began to notice that many of them were repeated over and over again. From these images came the 20 cards of the Devil’s Deck.
“After seeing the images returned to me by the voices that continue to torment me since that day when I began to make a pilgrimage, I am convinced that its nature is not heavenly. Yesterday I have committed perhaps the greatest of sins since Adam succumbed to the deceits of the evil one … I used the cards that I swore not to see again since I finished my pilgrimage. Hidden truths have been revealed to me. Hell is in us and the cards are a map to navigate the human soul. » 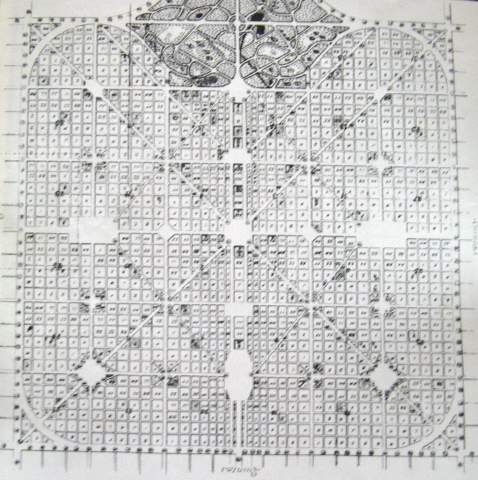 Since its appearance the devil’s deck has had several owners throughout history. For example, it is known that shortly after the Court of Cádiz ended the inquisition, the cards ended up in the hands of the Masons. Proof of this is the Argentine city of La Plata, founded in 1882, which was designed in the image of letter number XV - The Dead City and of the 23 squares of the city, 20 represent the cards and the remaining 3 Fernando, the boy and his father. During the twentieth century the whereabouts of the cards was largely unknown, reappearing again at the end of it in 1996. In her work “Spirit Cooking” the Yugoslav artist Marina Abramovic writes several passages from the diary of Fernando the flagellant, later making them known in an Interview that she had contact with the diary and that the cards are in the possession of an art collector which she refused to give the name. 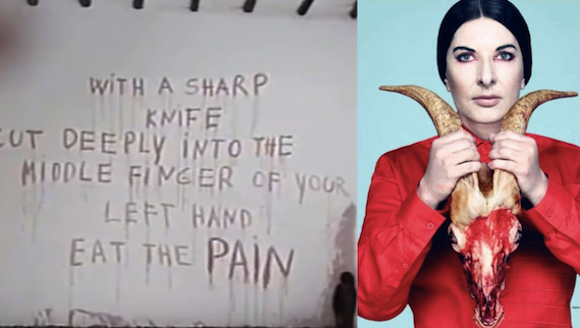 On July 8, 2007 the city of La Plata woke up with a macabre postcard: The corpse of a brutally murdered woman appeared in the Plaza de la Catedral (in the center of the city). The victim’s body had a total of 326 stab wounds, amputated hands, and all of her dentures were removed. That scene was forever etched in the memory of the city’s inhabitants. Next to the body, the only thing found was a cell phone (which was activated minutes before the victim’s alleged death) that contained a strange series of messages that came from an anonymous number.
As it became known later, these were the messages: 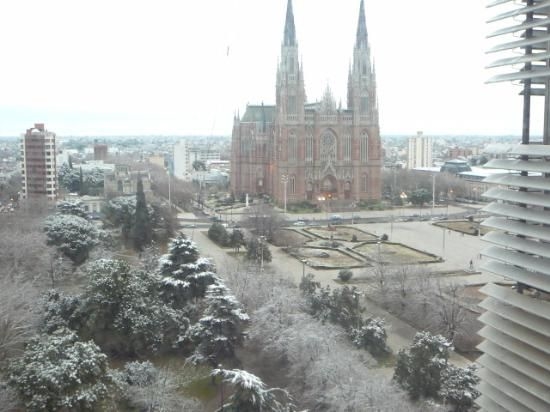